This module contains exercices designed to train visual and spatial abilities. It aims at training the patient's visual mental imagery and more particularly mental rotation in a 3D space. 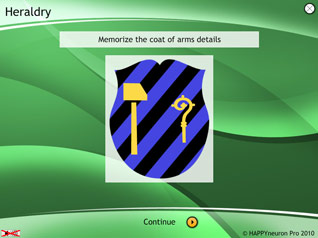 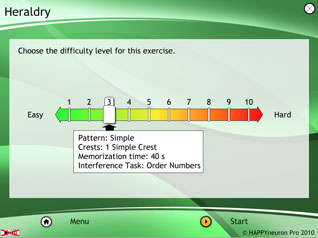 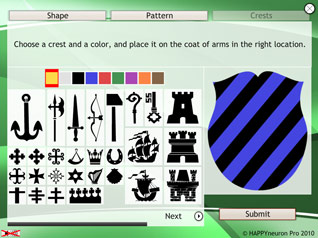 The emergence of heraldry occurred across Western Europe almost simultaneously. Over time, distinct differences developed between the heraldic traditions of different countries. In this exercise, the patient is asked to memorize a coat of arms with all the elements that make it up. He therefore has to pay attention to shapes, colors, and patterns and to distinguish the various shields, tinctures, ordinaries, crests, and charges. The user will then be asked to recreate the coat of arms with its components.

We rely on visual memory to remember the details of everything we see. Remembering city landmarks, recalling the logos on grocery products or bringing to mind the shapes of various traffic signs all entail use of this function. Spatial memory, by contrast, entails recalling objects in relation to one another; for example, locations on a map or the positions of stores in a shopping mall. This exercise therefore helps the patient strengthen his visual and spatial memory and perception as he has to explore and observe details of the coat of arms, link the components, and form a comprehensive mental image of the picture in order to recall it accurately. A further aim is to improve his visual attention and concentration skills.

10 levels have been specially selected to ensure an easy start and grant a regular progression. The parameters involved are the complexity of the pattern (plain, simple or complex), the number of crests (from 0 to 3), the memorization time (from 30 to 60 seconds) and the type of interference task (order numbers or words). 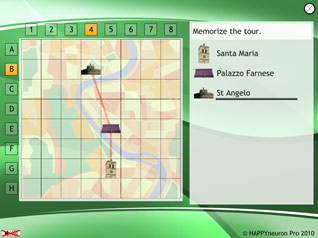 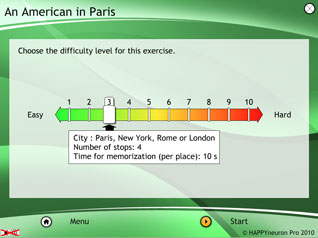 An American in Paris

Time to get the guidebooks out because this game provides a splendid tour through eight of the greatest cities on earth, including Paris, Rome and London! This exercise is divided into two parts. In the first part, the patient has to memorize the names of famous monuments of a given city (Paris, Rome, London…), together with their location on a grid. He must also pay attention to the presented itinerary. In the second part, the monuments on the grid have to be replaced and the itinerary shown in the first part has to be reconstructed.

This task trains the user's visual spatial perception as he has to form a mental image of the grid with all the information it contains. It also trains his visual spatial memory. Indeed, he has to store the mental images he has created in his mind in order to memorize the information and recall them effectively. In daily life, good visual-spatial skills are needed to orient oneself in a neighborhood, to retrace one's steps through a crowd, to remember landmarks, and also to be able to recognize that a person is in an unfamiliar environment.

10 levels have been specially selected to ensure an easy start and grant a regular progression. The parameters involved are the number of stops in each city (from 3 to 7) and the memorization time (from 8 to 10 seconds per stop). 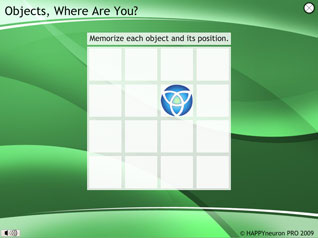 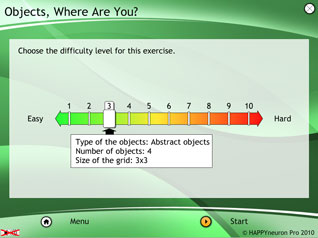 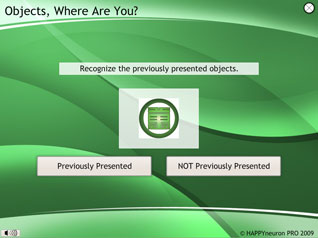 Objects, Where are You?

Misplaced our keys, cell phone, and notebook all in one day? This classic memory game that we all enjoy has such simple rules but it can get very challenging if we haven't played it for a while. This exercise consists in memorizing the location of several pictures on a grid, and then recalling them in the same spot as the patient has previously seen them on the grid.

A person who lives in a big city or has ever visited one will notice the omnipresent street signs, store logos and all the various symbols on a map that one needs to know in order to find one's way. This game can also help you remember the location of various objects in a room. This exercise trains the user's visual and spatial memory and perception as it is about creating associations between two types of information, an image and its location. He'll need to build a strategy to make a comprehensive association that makes their memorization easier. He also needs to pay attention to details and stay focused on the visual and spatial information.

10 levels have been specially selected to ensure an easy start and grant a regular progression. The parameters involved are the type of figures (objects or abstract figures), the number of figures (from 3 to 8) and the size of the grid.