These exercises train the ability to remain focused on a task or source of information. 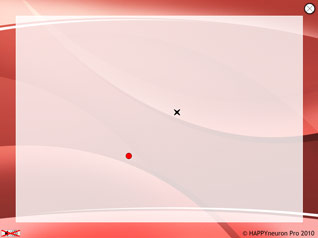 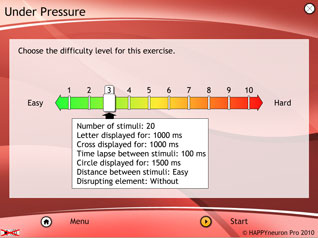 In this exercise, three types of stimuli (a red circle, a black cross, and a letter) will appear one after the other at different spots, anywhere on the screen. The aim is to determine quickly whether the red circle appears above or below the black cross.

This task trains the subject's sustained attention as he has to maintain performance and vigilance over a long period of time. He has to quickly detect the stimuli and scan the whole screen. It therefore also trains his visual and spatial skills. Visual-spatial skills are a set of mental processes that allow us to perceive, interpret and act on visual stimuli in our environment. Often, people aren't even aware that they are using their visual-spatial skills. As a result, people tend to take these skills for granted. The patient has to focus on the task and not let other stimuli distract him. That means he must control his actions constantly to be effective.

10 levels have been specially selected to ensure an easy start and grant a regular progression. The parameters involved are the number of stimuli (10 or 20), the display times for each symbol and the distance between them, and the presence of a disrupting element. 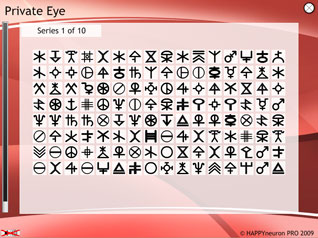 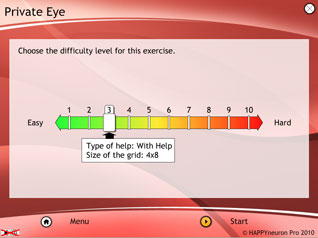 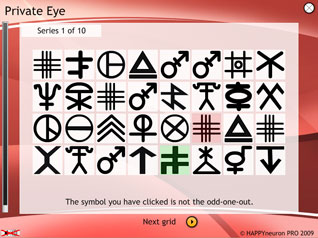 In this task, the patient needs a discriminating eye to locate a symbol in a grid full of intricate symbols and letters (intruder) that differs from other symbols (all of which are identical), and catch the sneaky suspect that was shown before starting the task.

Primarily, this task exercises the user's abilities for a specific type of attention called sustained attention and concentration. Attention is the essence of focus and the user will need to focus on looking for a specific target and ignore the symbols that could distract his attention. Any time a person pays attention to something, and any time he ignores something, data is created in his brain. That data has value, but only if it's gathered, measured, and analyzed. In addition, this exercise requires good visual scanning and shape recognition skills.

10 levels have been specially selected to ensure an easy start and grant a regular progression. The parameters involved are the type of help (with help, with intruder, multi-symbols, or odd one out, or not) and the size of the grid. 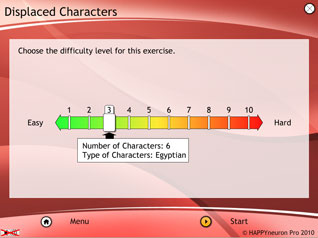 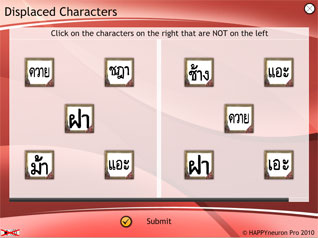 In this exercise, the patient has to attentively observe figures in a list and select in a second list those figures that are not in the first list. At the beginning of the task, both lists will be on the same screen (direct comparison). They will later be on separate screens.

This task helps the user to strengthen his visual and spatial perception and his memory by a process of distinguishing visual shapes and differences, as well as similarities amongst the characters. Memory is constantly called upon in varied ways such as to remember a pin code, a phone number, the title of a movie, an appointment, where you put your keys, or a historical event. Finally, this exercise also trains his concentration as he must pay attention to fine details in order to avoid confusion or omissions. Memory is needed everywhere in your daily life.

10 levels have been specially selected to ensure an easy start and grant a regular progression. The parameters involved are the number of characters (from 5 to 10) and the type of the characters (egyptian, mayan, runes or thai).