This module includes activities which require answering quickly. In addition, it trains the subject's sustained attention as he has to maintain performance and vigilance over a long period of time. 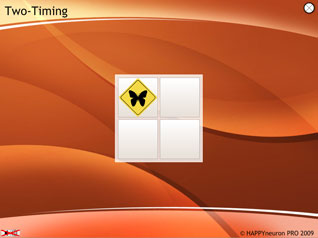 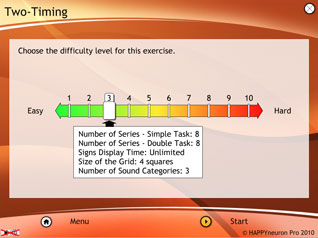 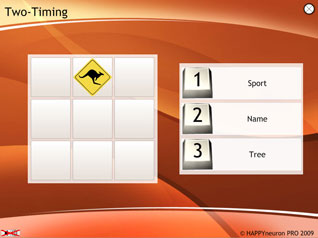 In this game, you have to carry out a simple visual task, then a simple auditory task, and finally, both tasks simultaneously.

This exercise trains you how to share your attention between two different sources of information.

10 levels have been specially selected to ensure an easy start and grant a regular progression. The parameters involved are the number of series (for both simple and double tasks, from 4 to 10), the display time, the size of the grid (from 2 to 9 squares) and the number of sound categories (from 2 to 4). 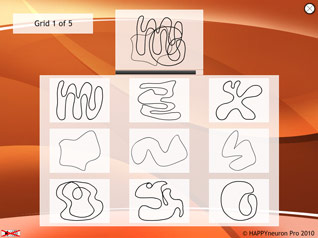 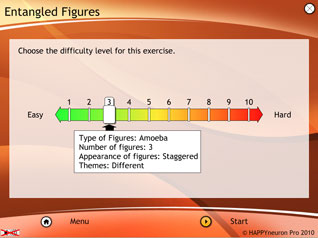 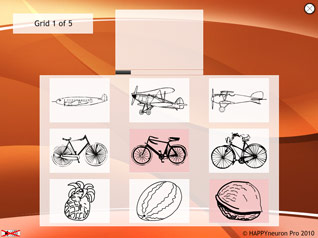 In this task, the patient sees three entangled objects, which, taken together, make up a more complex figure. These three entangled graphical objects are compared to a multiple choice of similar or different objects that are possible components of the complex entangled figure. He must choose the ones that are part of the entangled figure. Identification is easier when the figures are meaningful (objects, geometrical figures), so details are more relevant than the analysis of the whole figure. However, recognition will be more difficult with abstract figures. Naturally, such a complex task takes great concentration.

The exercise trains the user's visual and spatial skills and his working memory. Indeed, he has to identify the identifying characteristics of an object, store them in his working memory, and then transform the details into a whole by visualizing them in his mind and holding them. He must mentally disentangle the complex figure into its component parts. He also has to pay attention to details as they can help him distinguish the objects.

10 levels have been specially selected to ensure an easy start and grant a regular progression. The parameters involved are the type of figures (figurative drawings, geometrical figures or amoeba), the number of figures (2 or 3), the way they are displayed (simultaneously or not), and the variety of themes used. 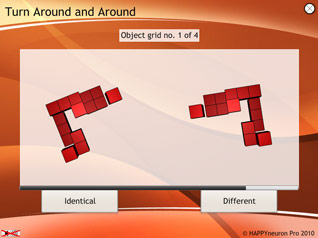 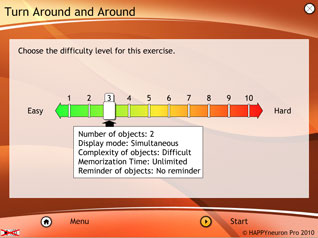 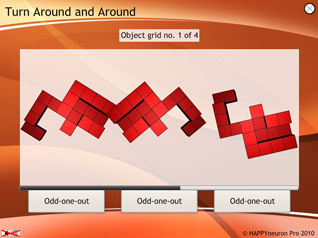 Turn Around and Around

In this exercise, the aim is to determine if the 3-D geometrical figures presented to the subject from various angles are in fact the same or a different geometrical figure. The exercise is designed to strengthen your powers of visual mental imagery, and more particularly, mental rotation, which we use to recognize objects seen from unusual angles.

Mental rotation is the ability to rotate mental representations of two-dimensional and three-dimensional objects and it is a skill we use daily. This task aims at training the patient's visual mental imagery and more particularly mental rotation. Indeed, he has to visualize elements in a pattern, identify surface patterns of 3-D objects and create a mental image of them, visualize their rotations, and make comparisons in order to decide whether the objects are the same or not.

10 levels have been specially selected to ensure an easy start and grant a regular progression. The parameters involved are the number of objects (2 or 3) and their complexity, the way they are displayed (simultaneously or not) and the memorization time. Sometimes also it is possible to view again the objects.